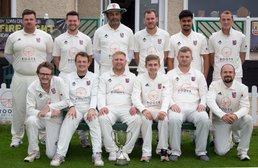 Huge day ahead for 3s

A win sees Danny Hill's side promoted to Division Four.

The home date with Wigston's First XI is their final outing of the season with three possible scenarios - up as champions, up as runners up or a defeat seeing them miss out completely.

The pressure has been on for the second half of the season as they went on a run of seven wins from their last ten as well as winning their fourth successive Challenge Cup and promotion would cap a superb first season in charge for Hill.

Their opponents sit fourth from bottom and are still in the relegation mix with a defeat opening the door for Leicester Banks 2s and Thorpe Arnold 2s to escape the drop to Division Six.

Back at the top of the table Bitteswell, who occupy top spot on 422 points - 17 clear of Hill's men, travel to third placed Shree Sanatan 2s, who are ten points further back on 395.

It promises to be an exciting day at Mill Lane - if you're at a loose end, come down and support the team and cheer them on to promotion and a possible title.

The game begins at 12.30pm with the bar open on the main pitch, where the 1s host title-chasing Loughborough Town.