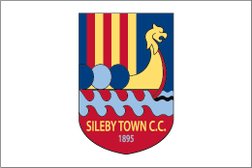 Mixed weekend for our sides

It's was a mixed weekend for our sides this weekend with just two league victories coming from our six outings.

Poor form with the bat continued for the 1s as they were dismissed for 66 by Rothley Park, with a former and a current 1st Class bowler claiming the spoils for the visitors.

Ollie Freckingham bagged 5-13 while current Leicestershire bowler Abi Sakande took 4-33 as the home side were routed at Mill Lane.

The 1s didn't surrender, however, as they fought hard to defend their small total - claiming six Rothley wickets before the visitors crossed the finishing line. Matt Ellis was the most successful bowler with 2-20 as his side claimed six points from the game.

The 2s also came away with a defeat, albeit a narrow one, at Barwell - picking up 13 points in the process.

Having won the toss and opting to bowl first, Steven Ingram will have been delighted to have dismissed the home side for 174 in the final over.

Wickets fell regularly in the Sileby reply as they ultimately fell 12 runs shy of their opponents with four balls remaining - Danny Hill top scoring with 23 with contributions of 22 by Sean Dudley and 21 by Pete Willcocks as they were dismissed for 162.

The first win of the weekend came from the 3s as they claimed a 90-run win over Leicester Banks 2s at Mill Lane.

Dan Tompkins top scored with 58 for the 3s as they posted 186 for 9 from their 40 overs with Asim Khan contributing 39 against his former club.

Sam Davies started the weekend as he was set to go on with 4-20 to dismiss the visitors for 96. There were also two wickets apiece for Bhurva Tank and George Bolton, who both claimed 2-24.

The welcome 25 points keeps Danny Hill's side within the promotion picture in Division Five East.

They were dismissed for 110 having opted to bat first with Stephen Loveridge top scoring with 28 while Will Rossiter and Josh Cundy both chipped in with 20 each.

Their 110 ultimately proved not to be enough as the home side ticked it off with the loss of four wickets with spinners Than Paramalingam (2-17) and Rossiter (2-25) picking a brace each. Young wicketkeeper Charley Ward also picked up his first senior catch on debut.

The 4s picked up five points from the game which keeps them firmly in mid-table.

There were positives as the Ladies kept up their excellent form in the Super 8s with Teagan Broughton picking up a five wicket haul in their win over Hinckley Amateur.

The right-armer picked up 5-25 as the Ladies won by one run, by virtue of scoring less runs but losing less wickets than their opponents.

Hinckley's 100 for 7 was negated by the Ladies 86 for 4, leaving Polly Huband's team victorious by the finest of margins.

Finally, the Sunday XI lost by eight wickets to Queniborough in the Grantham League.

Ryan Dawson top scored with 63 as the Sunday XI were dismissed for 127 with Ash Stevenson contributing 20 lower down the order.

Albert Blay (1-22) and Harry Rowe (1-31) took the wickets for the Sunday XI, but it proved to be scant reward as the home side romped home with over 24 overs to spare.